We have experienced many wonderful cultural adventures these last few months and as we take them in our stride each day, we often forget just how different life is here from our life in Sydney, Australia.

Any excuse for chat

We find that Granadinos and those who have adopted Granada as their home have a very social side with many excuses to get together. Whether it is a catch up over a ‘copa de vino’, ‘una caña de cerveza con tapas’, ‘café con leche’ or ‘chocolate con churros’, the constant and lively banter is just a part of daily existence in Spain. It is said that Granadinos spend fewer than two evenings a week at home. For a natural extrovert like me, I revel in the atmosphere, noise and ease of connection. The only frustration I experience is the constant dumbing down of what I want to say in order to communicate in some form of Spanish.  I know this will improve over time but it is hard to be suddenly linguistically handicapped. I admit to some envy of my Spanish-speaking husband who effortlessly communicates with everyone on any topic as I skulk off to talk to an English speaker to rest my brain for a bit. At least I know that at the end of the year, having battled through learning Spanish, I will have gained a third language!

The food and the land that grows it

I have observed here in Andalusia, a close relationship people have to the land and the food they grow. In Sydney I shop in a supermarket, never quite sure where my food originated, while here the food we eat is grown within proximity to where we live. People generally eat food grown on their own land, or buy directly from the farmers at the daily markets. Having said that, Andalusia is the food bowl of Europe and the intensive agricultural methods employed are environmentally questionable. In March this year a Sperm whale washed up on the coast of Spain with 59 different plastic items in its gut, most of which was transparent plastic sheeting used to build massive greenhouses in Almeria and Granada provinces. When we drove past the vast expanse of plastic greenhouses recently, our mouths were agape. We were viewing a moonscape.

On a different note, the changing of the seasons brings an assortment of new locally grown produce for us to try. At the end of summer we ate delicious fresh figs (higos) either directly from the trees or from the market. We picked blackberries (zazamoras) on our mountain hikes and we bought avocadoes and mangoes that were grown just down the coast.  During autumn we have eaten delicious pomegranates (granadas) bursting on the trees all around and at our local street market, we bought sweet custard apples (chirimoyas), persimmons (caquis), grapes and roasted chestnuts (castañas) – Is your mouth watering yet?

It is well known that Andalusia is one of the largest producers of olives and therefore olive oil but did you know that they also grow grapes and make a lot of wine? Most wine makers here were traditional hobby wine makers. They made small amounts for their own consumption. The wine was a mixture of red and white grapes that were fermented and stored in vats on the farm before being shared among family and friends. Now however, the processes are far more sophisticated and the winemakers in the Granada region are in the process of obtaining a D.O. (Domain Origination). I can honestly say that there are great wines from this area that I have been exploring and appreciating. My favourite so far is the Mencal white wine which just this year won a gold medal from Mundus Vini. It reminds me of the New Zealand sauvignon blancs I drink at home.

In October the students at my language school and I visited the farm of our Spanish teacher to pick and juice of the grapes he had grown. We picked both red and white grapes by hand and then proceeded to crush/juice them by…..FOOT!! Decked out in rubber socks to protect the grapes from my mangy feet, I stomped away on bucket after bucket of grapes. As the wasps buzzed around the grape pulp, the juice poured out through mesh and into a bucket. The pulp and seeds were left in the tub. When I tasted the delicious sweet juice in the bucket, I wondered why one would want to make it into wine. We took turns pouring the juice into the large stainless steel vats where the grape juice would ferment for 21 days. After all the work was done we sat down for a big feast of paella and sangria.

Halloween is a relatively recent import to Spain and yet the narrow, cobbled streets of the Albaicin lend themselves beautifully to the spooky mood of the festival. Several Halloween parties took place in the Plazas throughout the Albaicin neighbourhood and the kids had so much fun trick or treating (‘truco o trato’). The streets are already usually full of atmosphere and on Halloween, the social Spaniards went the extra mile with decorations, costumes and parties with prizes in the plazas. What a blast! 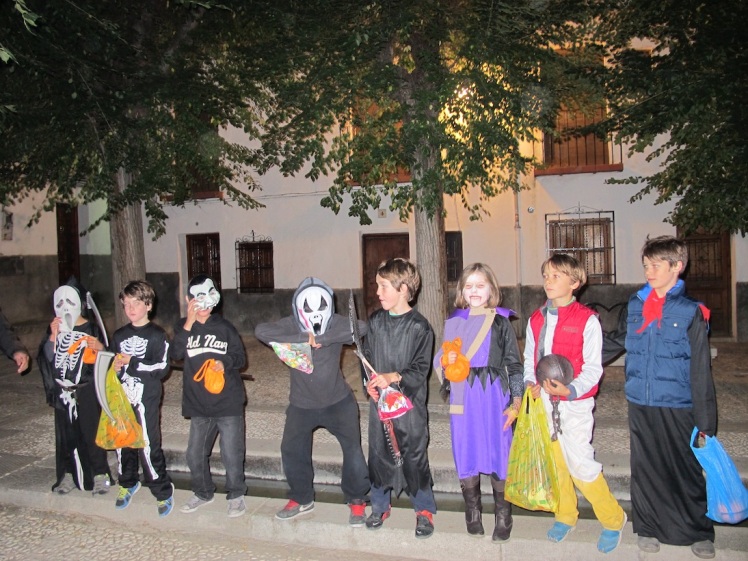 Every month, the parents’ committee of the local public school where our children attend (Colegio Gomez Moreno) organise a hike in one of the surrounding mountains. In October more than twenty families took part in a stunning hike called “La Dehesa de Camarate” which is especially beautiful in Autumn as the leaves in the valleys change colour. It was a gloriously warm day with blue skies as adults and children trekked up and back down the mountain with a picnic at the summit. The views of ‘la vega’ were spectacular and it was wonderful to meet new families while walking. Sadly our city-file son didn’t quite seem to appreciate it as much as us and he complained the entire way but we soldiered on.

The school’s parents’ committee (AMPA – Associación de Madres, Padres y Amigos) is now fully focused on fighting to keep our organic school kitchen (comedor) that feeds 164 students a day. The Andalusian Government wants to shut it down to bring it in line with its policy of commercial caterers who have long-standing contracts to serve frozen foods trucked in from far away. Our school kitchen has been serving locally sourced, organic food cooked onsite for the last ten years. The fight is on. Please help us by signing the petition. The more international attention this receives, the more likely the government will back down and let us keep our kitchen. I will provide more background on this crazy situation in a separate post. In the meantime here is an article about our fight (in Spanish) from the national newspaper El Mundo.

One thought on “Autumn months in Granada”