For many years we held this idea so close to our chest that we barely even talked about it between us. Now that we have fulfilled the dream, we reflect on how it came to be that we packed up our comfortable life in Sydney to live for a year in a country where we knew nobody.

The pre-amble to this story occurred more than a dozen years ago as I contemplated the type of man I might like to share my life with.

Top of the “pre-requisite list” was that he probably wouldn’t be Australian but he had to want to live in Australia and have established his own life here. It all sounded very specific and unlikely but alas, in 1999 such a man did find his way to me. He was a Mexican/Finn who had spent four years in Sydney as an international student and had a working visa to stay for another year – tick, tick and tick – Eureka!!!

What followed was…we moved in together, he became an Australian resident, we got a dog to see if we could jointly keep it alive! The dog survived as did our relationship and we decided to get married. We proceeded to make, bake and pop out a pigeon pair of Finnish-looking kids and spent the next years on the seemingly endless mouse wheel of sleepless nights, dirty nappies, settling, bathing and spooning mush into unyielding mouths. These were not unhappy times but the dominant feature of that period was utter exhaustion.

During a moment of inspiration in the midst of the child-rearing blur, my Finnexican husband (as he was nicknamed) suggested we move overseas for a year to gain some perspective on the relentlessness of having two very young children and a dog. I can’t tell you exactly what I said or did but it was along the lines of: “Are you f&*#ing crazy? You are asking me to move overseas with a toddler and baby when I can barely get out of the house each day to go to the park? Ask me again in 5 years but not before!”

And there we were in 2013 … the clouds of sleep deprivation had parted, as had the financial strain of daycare fees and living on one income. Our son and daughter both attended the local primary school, my husband and I enjoyed our respective work, we had enough time to be adults together as well as enjoy time with the kids. The balance had come back to our lives and we decided it was time to shake it all up and spend a year living in a country where we knew not a soul: SPAIN. 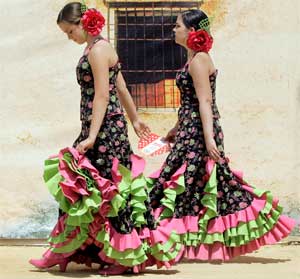 The main reason for going to Spain specifically was that we wanted our children to be fluent in Spanish, the language of their grandfather, uncles, aunts and cousins in Mexico. Spain is also a warmer part of Europe and culturally it seemed more relaxed and vibrant than the north. My husband and I spent time in Spain in our early twenties (prior to meeting each other) and we both felt it was a place in which we wanted to spend more time. We loved the vibrancy and openness of what we had experienced and we felt it would be a brilliant base from which to explore Europe and to build a life for a year.

Our assumptions were well founded and in the short space of 12 months we became part of a warm, like-minded community in Granada. Our only regret was that we couldn’t stay for two years rather than just one.

In addition, my husband and I had been dreaming of visiting Europe together since we first met yet the trip had always eluded us for one reason or another, particularly once the children came along. I had never met my husband’s Finnish family and I hadn’t been back to visit my Swiss host family, from my exchange year, in more than 10 years. It seemed uneconomical for four of us to go to Europe for a few weeks of holiday and that’s when we realised we had to aim for a whole year.

It took us longer than we had hoped to finally visit Europe however once we landed, having a year to explore and immerse ourselves in the life made it worth the wait. Financially it actually cost less than if we had gone for a one month holiday. By renting out our home in Sydney, we were able to cover our rental expenses in Spain. Living off my husband’s long service leave wage at half pay was also sustainable in Spain where the cost of living is about half to a third of what it is in Sydney.

It really was the best year of our lives which has made it all the harder to adjust back to regular life now that we are back in Sydney.

9 thoughts on “Why we went to Spain”