What happens when you travel the world during the “World Cup”?

It means you see how each country celebrates or mourns their teams’ wins and losses. It also involves witnessing the varying degrees of football madness in each country with outdoor screens, crowded bars, terraces and colour-coordinated patriotic paraphernalia of flags, banners and more….

Our whirlwind farewell tour of Europe and Thailand coincides with the World Cup and every location we have visited has had crowds supporting, celebrating and mourning their home teams or others.

World Cup fever involves connecting with people from all over the world over the idea of a ball, a pitch, some goals and talented footballers. It isn’t called the “world game” for nothing. Conversation starters are assured as people from all walks of life proffer their opinions to anyone prepared to listen, about who will win the match, group rounds or the whole tournament.

We have also witnessed foreigners who would normally try to blend in to their surrounds, loudly displaying their patriotic colours and frequenting the local venues that screen the matches. I met one brave Dutch man who came to a local Mexican restaurant in Paris to watch the Mexico-Holland match. I say ‘brave’ because Mexico was winning until the 88th minute when Holland was awarded a controversial penalty that dealt the sickening blow to Mexico’s world cup chances. There was pure devastation in the room and this Dutch man was in the corner of the bar eating an enchilada and apologizing profusely to anyone who approached.

For a family like us with four nationalities and a new adopted home of Spain, our allegiances have been split in several directions. All our countries have now been eliminated (Spain, Australia and Mexico). We started to wonder if we had jinxed all the countries we visited as each time we arrived that country would lose. In Granada we watched Spain and Australia lose their first two group matches. The day we arrived in Lisbon, Portugal was eliminated from the tournament. It wasn’t until our arrival in Paris that the spell was broken. On our second evening in Paris, France won their round of 16 match against Nigeria and finally there were joyous celebrations on the streets instead of the quiet disbelief we had experienced until that point.

There is something unifying about sport on a global scale. As I watched the various games, I would think about my friends in those countries knowing that they would be watching also. I would send messages to them and communicate about the game despite being in completely different time zones. It was nice to connect over football even though I am ultimately not a big fan of competitive sport. I don’t like that for someone to win, someone else loses. Call me a new-age softy but I always feel for the losing side rather than the winners.

In every country we visited during the World Cup, it was fascinating to experience the differences in World Cup Fever:

Just a couple of weeks prior to the tournament commencement I visited Holland where whole streets were decorated in orange flags, Dutch flags and orange carpet to boot. Although initially the Dutch were not hopeful of anything great this tournament given that they were ranked outside the top nine, the national fervor and pride for their team could be seen everywhere. Supermarkets had entire sections devoted to fan paraphernalia: orange flags to decorate your house, Dutch flags, oversized orange sunglasses and orange t-shirts. Following Holland’s stunning thrashing of Spain in their first game, the nation’s hopes for further wins piqued and has been rewarded up to this point (even though I believe Mexico should have won against Holland in the Round of 16 match – yes, I am biased!.

Coming into the tournament as World Champions and having dominated the European Champions League final just weeks before (Real Madrid and Atletico Madrid played in the final), Spain’s hopes were sky high for a repeat win as in South Africa. Alas, Spain failed to make it past the group stages losing to both Holland and Chile and winning only against Australia. It was all bitterness for me given that my two teams were Australia and Spain and both were eliminated from the same group.

Portugal is a soccer-crazed country, even more so than Spain based on what we saw. The day we arrived in Lisbon, Portugal was fighting to stay in the World Cup. They had to pull off a massive win against Ghana to move beyond the group stage and as we drove through Lisbon’s wide boulevards, we could see enormous screens erected in parks, plazas and streets as well as TV screens in most bars and cafes. Crowds gathered around and cheered as Ronaldo scored a goal. Although Portugal rallied to win 2-1, it wasn’t quite enough to qualify to the next round. Portugal was out and we were treated to another nation’s disappointment. It wasn’t until the following day when Brazil beat Chile in the knockout rounds that the Portuguese, honouring their historical links to Brazil, decided it was worth celebrating. As Brazil won by an inch in a penalty shoot out, Lisbon exploded into celebration. Saturday night in Lisbon became one large heaving party of Brazilian colours and music. So glad I had earplugs to sleep that night. 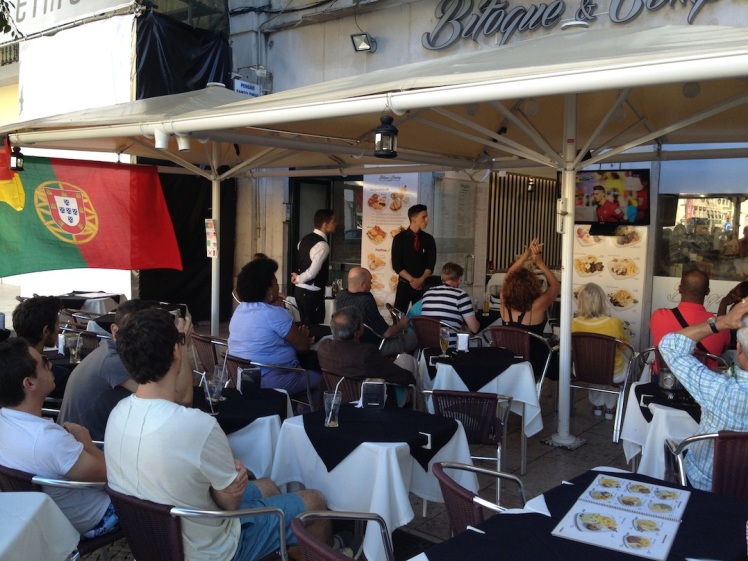 France
The day we arrived in Paris my husband’s Mexican team took on Holland (not them again!!). We happened to be staying in an airbnb apartment in the 9th arrondissement just above a funky Mexican restaurant, which had an enormous screen erected for the world cup. We crowded in with some very excited Mexicans who celebrated in style (unlimited sangria from the restaurant) the whole way until the 88th minute when Holland stole victory from their clutches in a controversial penalty. It was all down hill from there as the Mexicans slunk into the night with their heads bowed in disappointment.

The following evening France played Nigeria and we had the feeling the whole city was watching the game. When France won, the streets filled with singing, cheering Parisians. Finally our jinx was broken and we felt like celebrating with our host country.

Thailand
As we move further east towards Australia, the time zone for watching matches deteriorates significantly. Semi final viewing will take place at 11pm and 3am whereas in Europe matches were screened at the civilized hours of 6pm and 9pm. This evening my husband and son will go to a local Thai village Bar with a French family we met here, to watch France play Germany. We are staying on a small traditional Thai Island (Koh Yao Noi) in Phang Nga Bay so there are limited options for watching the match.

On a side note, the French family we met happens to be on their way home to Paris after a year of travelling in Australia, New Zealand, the Pacific Islands and South East Asia. Fancy that! We cross paths in Thailand on our way home from each other’s countries. As you can imagine we have shared so many stories and our 10-year-old boys have not stopped playing soccer since they met. No common language required, only a soccer ball and some grass.

Now, back to the main game of the World Cup…. although Thailand is not in the world cup, they are just as crazy about football. On this tiny island we have already counted at least four soccer pitches and check out this gorgeous video that recently went viral about a team of young soccer players from a floating village very close by to where we are currently staying in Phang Nga Bay. I am hoping to take my son to this village to see the floating soccer pitch in real life. Maybe he can even have a game on the pitch with the Southern Thailand soccer champions!

As it so happens, after more than a year away, we land in Australia on the day of the World Cup grand final match. Given that the final will screen in Australia at 6am on a Monday morning, we are hoping the jetlag might work in our favour. Who knows who will be in the final, I just hope it won’t be Holland who single handedly eliminated my three teams (Spain, Australia and Mexico). Am I bitter? YES!