Every journey has its requisite ebbs and flows, ups and downs and in-betweens. I think that is why travel makes me feel so alive. As one tests oneself against new and changing situations, drifting is not an option. Being permanently awake to the new, while exciting, can also be overwhelming at times.

My family and I are eight months into Our Year in Spain and seriously bunkered down into winter hibernation.  The excitement of arrival, discovering a new city, language and culture has settled into a daily rhythm and as the novelty subsides, real life begins… Diving head first into the frivolity and excitement of Autumn in Granada followed by a beautifully refreshing Christmas in the mountains of Switzerland, we returned to Granada and suddenly it was 2014. 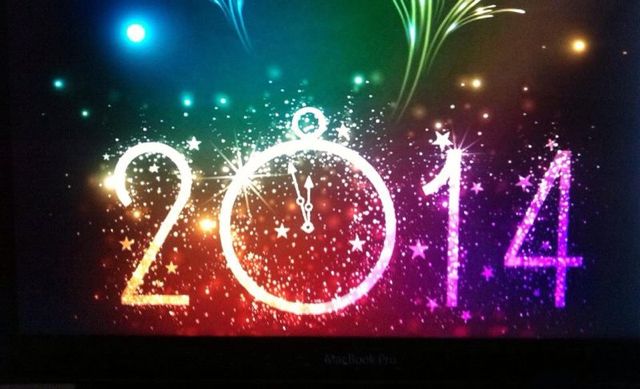 The New Year brought with it the psychological weight of our departure THIS year, in addition to launching us into the thick of a European winter. Even in Southern Spain where the sun has the power to warm you, there is no escaping the cold and worst of all….WET winter.  Granada, a usually vibrant and eclectic city, retreated from the cold and rain. The plazas I came to know full of tapas eating, beer swilling, loudly chatting people, became deserted with the first drops of rain. The lively city bunkered down waiting for winter to pass.

The winter has provided some time for reflection and it has been fascinating to watch how each of our four individual journeys, while bonded together as a family, has differed. Each of us has had our exciting highs and our individual struggles.

My journey so far

For me, the initial excitement of learning a new language was tempered by the enormous frustration of not being able to participate fully in the language. The comfort and laughter I experience with the women in my English-speaking book club here in Granada just highlighted the frustration I often experience in other situations when I am the only one who isn’t in on a Spanish joke or can’t follow a conversation. I can see the patience tested of the people I am talking to as I clumsily construct a sentence translated from English that probably means something completely different in Spanish. It is equally depressing and exciting that my 9-year-old son now corrects my Spanish. I wondered at what point my children’s Spanish would overtake mine and it appears we are there. Since I completed my language course in November I have observed my Spanish stagnate, meanwhile our children, who are immersed in Spanish at school 5 days a week, continue to build their skills. Although it took a good 6 months to happen, I recently began to miss my work and structured life in Australia. On the other hand, the nice part about having time is that I can say ‘yes’ to new experiences and explore what is on offer rather than having my time perpetually assigned to prior commitments. For example, we have become groupies to the numerous musician friends we have made in the Albaicin.  We have been fortunate to attend several exquisite concerts of the Granada City Orchestra as well as performances of our friends’ band called The Mahoney Sisters. Other Granada offerings include contemporary theatre productions at the Teatro Alhambra, cabaret shows, a Tango festival, Flamenco shows, Retroback film festival and more. Thanks also to the school hiking group and our friends in the Albaicin, we have experienced numerous beautiful hikes to Granada’s surrounding mountains, valleys and rivers. And due to the successful football card bribery scheme, our son has begun to enjoy these hikes.

Spontaneity has been another benefit of this year. Yesterday when we awoke to a bright sunny, wind-free day, my husband and I decided to drive to the Sierra Nevada ski fields (only a 30 minute drive from Granada) where we had our first ski date as the kids were at school. It was quite a thrill to be able to do this.

I won’t presume to describe my husband’s experience but I will say that I can tell he is more relaxed not having to commute to work in an office five days a week. Here he has alternated between working remotely back to Australia and being on his long service or annual leave. Working remotely does have some challenges when the time difference between Sydney and Spain is 10 hours (essentially day and night). This week he has had a work call every night and rarely earlier than midnight. It does mean that he suffers from jetlag, or ‘work lag’ as we call it, but it is only temporary and in a few weeks he will be back on holidays!  He has also become a dedicated soccer and tennis dad; transporting our son to all corners of Granada and Andalucía for his soccer and tennis competitions.

Our highly competitive son is in sport heaven here, not only joining the local football (soccer) club and playing in a team with boys from his school, he loves to watch his football heroes playing in the Spanish league. And I haven’t even mentioned the obsession with soccer card collecting and swapping.  In addition, he made the local tennis team (consisting of five boys his own age) and travels around Andalucía on weekends with his team to represent Granada province. In April his team will play in the semi finals in Seville. Initially when we arrived, being the new kid and not understanding the culture or language, he had some social issues at school, which was a low point, however it has settled down now and I am hoping he has gained some emotional intelligence and resilience in the process. Through school and all his involvement in sport, he has picked up Spanish quickly and he confidently chats away and completes all his schoolwork. I love all the Spanish expressions he has picked up like ‘olé’ when expressing a win.  Just this week he admitted that he likes school here a bit more than Australia because he can play soccer (with real goals and soccer balls) in the playground as well as ping-pong and they have more PE classes and language classes than at home. I think it also helps that he only has 14 kids in his class and a great teacher.

Our daughter has had a harder time learning Spanish although she is still doing well. She has 25 children in her class and has found the noise and chaos a bit daunting.  She is a happy-go-lucky kid and gets on well with everyone but does not have such specific interests as our son so is slightly on the outer. She is quite observant and blows us away with her insights of life here, as well as her strong sense of self in the face of a completely new culture.  I can see how she enjoys the amount of quality time she spends with us here and has benefitted from having us more present to her than we are in Australia where we are pulled in a dozen directions each day.

Each one of us has grown and responded differently in our new environment with the result being that after eight months, we are definitely relaxing into the life more. It is a shame that it takes nearly a year to understand a place by which time we have to leave. Spain really is a most beautiful country and continues to dazzle us with her beauty, warmth of spirit and diversity. Below are some photos of our recent trip to Cabo de Gata in Almeria which is a desert park with undulating hills that plunge into the Mediterranean Sea. 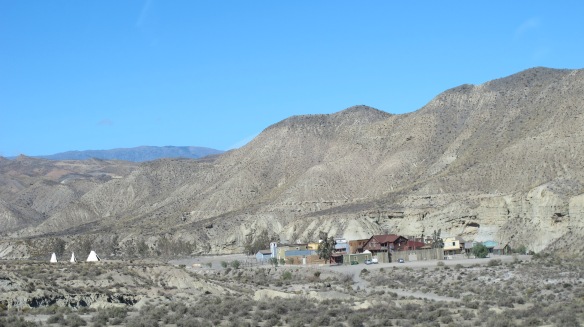 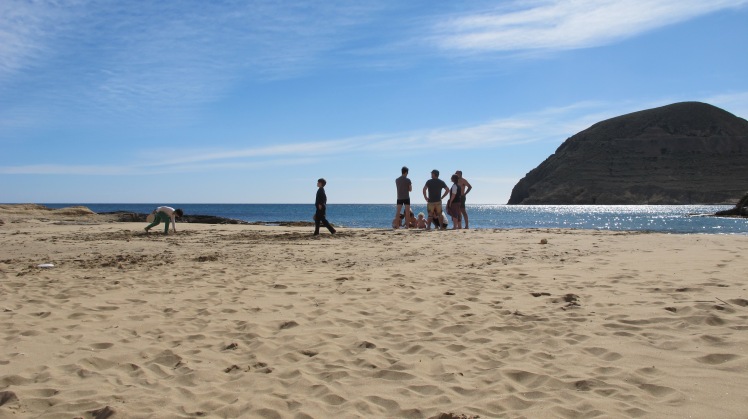 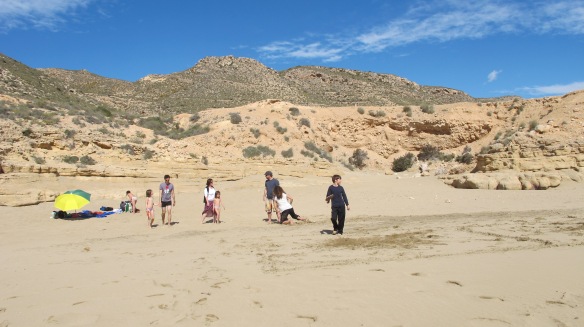 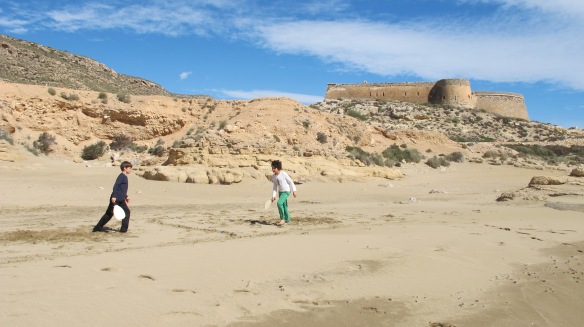 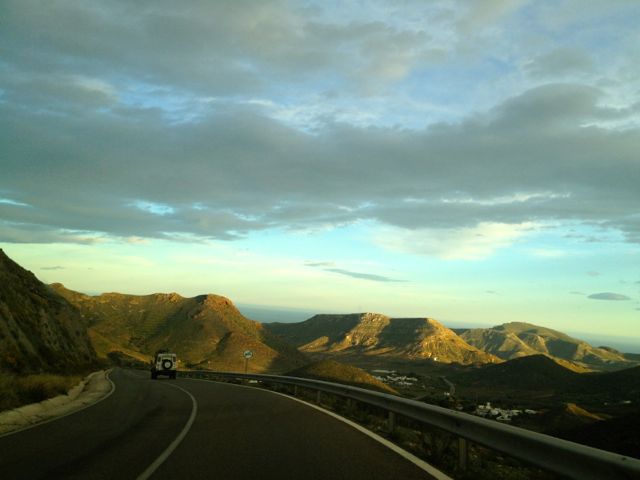 8 thoughts on “Reflecting on 8 months in Spain”